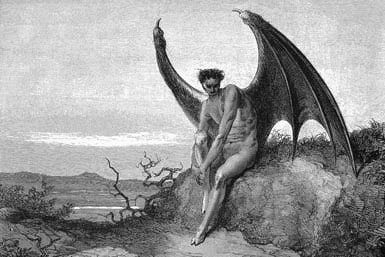 Because Satanists (both theistic and LaVeyan/atheistic) and Luciferians both use terms Christians associate with the Devil, it is commonly assumed that Satanists and Luciferians are one and the same, or that one is a subset of the other. While the two groups do have a lot in common, Luciferians view themselves as separate from Satanists.

From the Luciferian viewpoint, Satanists are primarily focused on the physical nature of man, exploring, experimenting and enjoying that nature while rejecting endeavors to rise beyond it. Satan is an emblem of carnality and materiality. Luciferians view Lucifer as a spiritual and enlightened being. And while Luciferians do embrace the enjoyment of one's life, they accept that there are greater and more spiritual goals to be had.

Many do see Satan and Lucifer as being different aspects of the same being, the carnal, rebellious and material Satan vs. the enlightened and spiritual Lucifer.

Luciferians also commonly see Satanists as overly-dependent upon Christian understandings, embracing things like pleasure, success and sexuality precisely because the Church as traditionally condemned such things. Luciferians do not see their acts as rebellion, but rather are motivated by their own merits.

Luciferians put more emphasis on the balance of light and dark.

Satanism and Luciferianism are both highly individualized religions. There is no single set of beliefs, rules or dogmas for either group. However, some generalities can be made. In general, both Satanists and Luciferians:
Talk about human beings as gods, having mastery of the planet. If they believe in a literal Lucifer, they pay him respect rather than worship, acknowledging he has many things to teach rather than finding themselves subservient to him.
Have sets of ethics, which include showing respect to those who deserve and leaving people alone who have caused no grief.
Support creativity, excellence, success, freedom, individuality and enjoyment.
Reject dogmatic religion
Are particularly antagonistic toward Christianity, although not to Christians. Christians are often viewed as victims of their own religion and being too dependent to escape it.