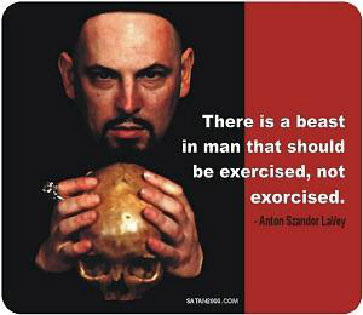 LaVeyan Satanism (also known as Atheistic Satanism or Modern Satanism), referred to simply as Satanism among adherents, is areligious philosophy founded in 1966 by Anton LaVey and codified inThe Satanic Bible in 1969. Its core beliefs and philosophies are based on individualism, epicureanism, secularism, egoism, and self-deification, and propagates a worldview of naturalism, Social Darwinism, and Lex Talionis.[1][2][3][4][5]

Additionally, Satanism involves the practice of magic, which encompasses two distinct forms; greater and lesser magic.[6] Greater magic is a form of ritual practice and is meant as a self-transformationalpsychodrama to focus one's emotional energy for a specific purpose.[7]Lesser magic is based on the laws of attraction and consists of using one's natural abilities to manipulate others.[8] LaVey wrote extensively on the subject of magic and ritual in his works The Satanic Rituals andThe Satanic Witch.[9]

Contrary to popular belief, LaVeyan Satanism does not involve "devil worship" or worship of any deities. It is an atheistic philosophy that uses the character of Satan as a symbol of pride, carnality, liberty,enlightenment, undefiled wisdom, and of a cosmos which Satanists perceive to be permeated and motivated by a force that has been given many names by humans over the course of time. Satan (Hebrew: שָּׂטָן satan, meaning "adversary") is seen as a symbol of defiance to the conservatism of mainstream philosophical and religious currents, mainly Abrahamic religions, that see this character as their antithesis.[10][11][12][13][14]

Adherents to the philosophy have referred to Satanism as a non-spiritual religion of the flesh, or "...the word's first carnal religion".[15][16]